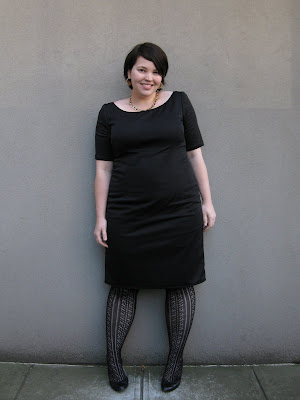 Dress: MyBlackDress
Patterned Tights: Voodoo Hoisery
Shoes: Wittner
I’m “on tour” (i.e. chauffeuring) with two international authors at the moment, which means that I can dress up a little without having customers ask me – with some suspicion – why I’m looking so fancypants.
Up side means I can get some more wear out of my PLBD, down side is that I’d forgotten how much I loathe pantihose.
I’d actually planned to wear my Spanx Fishnets today but they’ve disappeared (possibly tossed due to lack of use?) so instead I had to settle for some patterned tights from Voodoo.
I was beyond excited last winter when I discovered that both Voodoo and Kayser were doing a range of patterned stockings in a plus size. Some of them were even in colours!
I was a bit disappointed in the end though – the range was minimal, the fit was iffy, they wore out really quickly between the thighs and (my pet peeve) they constantly crept lower and lower until I was doing a Dick Van Dyke style penguin waddle. 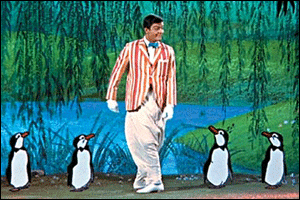 I usually combat this problem by wearing a second pair of knickers over the pantihose to keep them aloft, but of course I forgot today and had to excuse myself three times to surreptitiously duck into the loo and wrench the crotch up from between my knees. Noice!

16 thoughts on “Pantihose of DOOM”