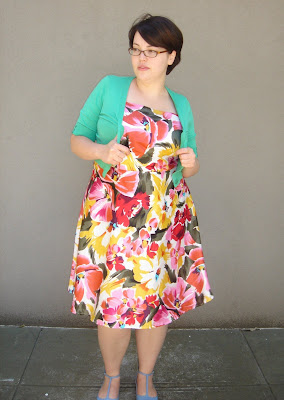 Cardigan: Portmans
Dress: Lily (remixed) from Nordstrom
Shoes: Zoe Wittner
Phoo-ey! It was a HOT one today, with Melbourne’s mercury finally skyrocketing into summer. It was a good day to finally don the dress that I bought from Nordstrom, oh, all those months ago.
I’m still not convinced that bringing the hem up, and adding straps was the right decision to make, but I have to admit that it was beautifully cool and breezy – especially after I shed the cardi (about 2 seconds after I left the shadow of the behemoth that towers over my inner-city courtyard)
Wow, it’s a BRIGHT dress though! Not at all Melbournesque, as evidenced by the comments of “what a colourful/summery/cheerful dress you’re wearing”.
It’s finally summer, folks! Embrace it!