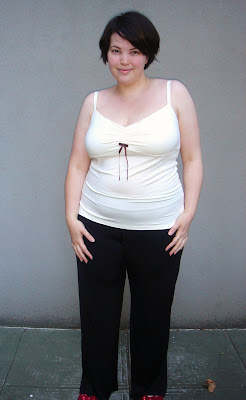 Singlet: Bravissimo
Pants: Elle Macpherson Intimates
Slippers: Peter Alexander
Ah bliss…
I’m still on holidays, and have spent the last couple of days primarily in my sleepwear. There’s something wonderfully decadent about still being in your PJ’s at four in the afternoon, isn’t there?
I promised myself that tomorrow, tomorrow I’d stop being such a lazy git, and actually get up, get dressed and leave the house.
However, what I received in the mail today may have delayed my return to the outside world…
It’s my Bravissimo order!
I mentioned Bravissimo in passing a month or so ago, namely their “supportive sleepwear”, and my desperate desire for a nightie that would keep my bosoms aloft (you may recall I bought myself a HotMilk nightie at the time).
Well, post-Christmas, Bravissimo released a couple of very nice looking dresses, and I thought; as long as I was treating myself to an order…
I’m indebted to Miss Kitty-Cat at the Vogue Forums for bringing Bravissimo to my attention. It’s such an innovative idea: clothes fit not just by dress size, but by cup size, too! It does away with the problems that most women have with what my little sister has rather wonderfully dubbed “boob pockets”.
And I must say – as cute as my HotMilk nightie is, the Bravissimo PJ top works so much better. And it’s on sale at the moment, so if you were deliberating… do it!