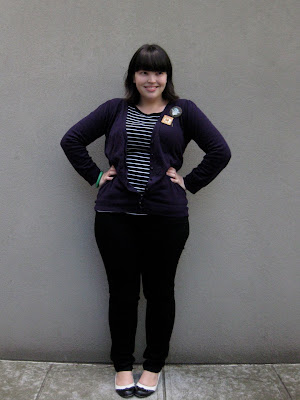 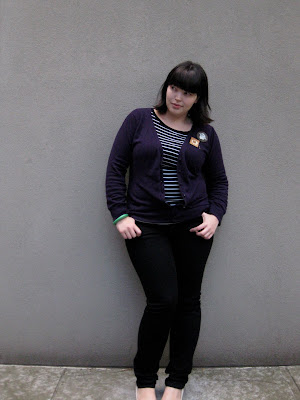 Jeans: Sussan
Striped Top: Dorothy Perkins
Cardigan: Barkins
Shoes: Wittner
Brooches: Catrabbit & Button Tree
Bangle: Phillipa
So I finally managed to find a pair of narrow leg black trousers that I liked, and astonishingly, they’re actually jeans.
I have a bit of a love-hate relationship with black jeans. Especially narrow leg black jeans. Alongside a sulky demeanour and too much hair product it’s generally recognised as being an Emo wardrobe staple and since I battle against Emo tendencies on darker days anyway I’ve always tried to steer away from resembling one as I, at 31, am well past their usually mid-to-late-teens prime.
Still, a couple of the groovy gals in my bookclub also embrace the dark denim look and look fantastic doing it, so I’m being a copycat and trying my hand at it too.
I figure coupled with a cardigan, a couple of brooches and a grin I’m bucking the Emo trend and joining them in reclaiming the narrow-leg black denim jeans for those who deserve it the most.

9 thoughts on “Getting My Emo On”